Democrat Mayor Sylvester Turner of Houston, TX has found himself in a world of trouble with a massive scandal brewing after the former Houston Housing Director Tom McCasland made serious allegations of Turner influencing the competitive bidding process to favor his former law partner. McCasland made these accusations in public during a city council meeting, his employment with the city didn’t last long afterward. Since that fateful meeting in response to outcry from the City Council, Mayor Turner has ordered the City Attorney Arturo Michel to review the allegations in order “to determine whether there were any illegalities, fraud, conflicts of interests, violations of procedures, practices, and policies.” But there is at least one significant problem with the proposed investigation: the City Attorney reports directly to the Mayor.

“My administration works extremely hard to avoid potential conflicts of interest, and I have not conducted business differently than any former mayor in the city of Houston,” the statement read.

According to Houston Public Media,

“During Tuesday’s city council housing committee meeting, former housing director Tom McCasland blasted the mayor over his decision to distribute more than $15 million in federal funds to the Huntington at Bay Area project as part of the city’s Harvey Multifamily Program — money that comes from the U.S. Department of Housing and Urban Development and is intended to help replace damaged housing lost in Hurricane Harvey.

McCasland said the mayor’s decision would grant the city 274 fewer units than other projects recommended by housing officials.”

The Harris County District Attorney has now become involved and the City Attorney recommended that the council hire an outside law firm to conduct the review rather than having it handled internally. The city council has since delayed a vote on whether or not to dole out $250k to hire an outside firm. Councilmember Michael Kubosh told Fox26 Houston, “You can’t have somebody who’s, who’s working for you to do to investigate you. It’s just, it’s just not appropriate and to have the city attorney. To investigate something he’s already signed off on. It’s just not credible. We have to have an outside third party investigation done to do it right”

Councilmember Mike Knox agreed, saying, “The mayor often says. If you see something, say something. That’s important. Well Tom McCasland saw something, he said something and he got fired. I think it’s important that we have some third party investigate this, uh, someone that the mayor doesn’t actually control their job or their paycheck.”

This is hardly a new move for Democrats though, it hearkens back to then-Attorney General Eric Holder being found in contempt of Congress by the GOP which would’ve required he assign a prosecutor to prosecute himself for the Fast and Furious debacle.

Nancy Pelosi and her gang are using everything they possibly can from the Jan. 6 investigation to go…
byStaff Editor

During this past Sunday, Fox News published an exclusive interview they held with a group of recently laid-off…
byadmin

Reports are now coming in that Enrique Tarrio, National Chairman of the Proudboys has been BANNED from Washington,…
byMatthew Holloway
One comment 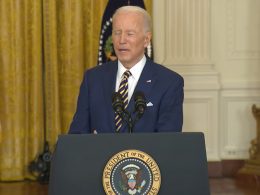 The 2022 and 2024 elections are existential threats to the Democratic Party, the polling implosion in the fourth…
byMatthew Holloway

In the halls of the Illinois House of Representatives mask mandates just became a no-holds-barred political battle, and…
byMatthew Holloway