Penn State, or the Pennsylvania State University, has announced that it has terminated its plans to open a ‘Center for Racial Justice’ just over a year after the project was announced.

Liberal faculty members called on university officials to publicly address the plans for the project as its fate was in question due to funding.

At the time of the Center’s announcement in September of 2021, Penn State cast the project as part of its effort to “address the challenges of racism, racial bias, and community safety.”

The center would have been under the domain of Penn State’s Social Science Research Institute.

“While this is just the beginning, the formation of Penn State’s Center for Racial Justice is the result of our University community taking action together toward continued growth,” said Penn State President Eric J. Barron announced. “By aligning with our education and research mission and ensconcing the center into Penn State’s successful institutional research model, we are bringing scholarly work and dialogue to the forefront. We will be poised to draw upon our research excellence, attract additional talented scholars, and develop new insights in these critical areas.”

Barron stepped down in May of 2022. Neeli Bendapudi, the former president of the University of Louisville has since replaced him although Barron is working as a paid consultant for the school until 2023.

According to Spotlight PA, Bendapudi questioned if Penn State would financially support the Center for Racial Justice at a meeting with a search committee tasked with finding a director for the project.

Penn State has taken a number of steps to improve its financial situation by 2025 after reporting a $150 million deficit at the end of the last fiscal year. Ways in which the university did this was raising tuition, implementing a “strategic hiring freeze,” and cutting its budget by three percent.

In an announcement on Oct. 26, Bendapudi said the university would not pursue the center’s launch.

“I have determined that enhancing support for current efforts by people who know Penn State best will be more impactful than investing in a new venture, and so we will not pursue efforts to launch a Center for Racial Justice,” the president said.

Bendapudi continued by claiming that Penn State will instead identify and invest in current diversity, equity, inclusion, and belonging initiatives.

“Scholarship and research on racism and racial bias play an integral role in not only attracting and retaining faculty who are leaders on this topic, but also on combatting bias and hatred within our communities, the nation and world,” she said. “There is so much potential at Penn State for us to expand, connect and invest in the work of our faculty experts and existing networks in a way that grows our impact and standing as an institution in this scholarly discipline.”

Nancy Pelosi is at it again, twice now her efforts to impeach President Trump have failed. In her…
byadmin
3 comments

Only in a communist country can the government pass out surveys that have major consequences. The Chinese government…
byStaff Editor 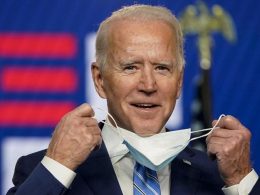