The feds have announced that 3.6 billion dollars have been seized and two people have been arrested in Manhattan for an alleged conspiracy to launder cryptocurrency that had been stolen during the 2016 hack of Bitfinex, a virtual currency exchange.

Ilya Lichtenstein, 34, and his wife, Heather Morgan, 31, were arrested on February 8th, and face charges of conspiracy to commit money laundering, which has a maximum sentence of 20 years in prison, and conspiracy to defraud the United States, which has a maximum sentence of five years in prison. They have not yet been charged in the original 2016 Bitifenex hack.

According to officials, the couple was able to steal more than 94,000 bitcoin, which was worth approximately $3.6 billion at the time. Currently, the total stolen bitcoin would be worth around $4.5 billion.

“Today’s arrests, and the department’s largest financial seizure ever, show that cryptocurrency is not a safe haven for criminals,” said Deputy Attorney General Lisa O. Monaco. “In a futile effort to maintain digital anonymity, the defendants laundered stolen funds through a labyrinth of cryptocurrency transactions. Thanks to the meticulous work of law enforcement, the department once again showed how it can and will follow the money, no matter what form it takes.”

Assistant Attorney General Kenneth A. Polite Jr., of the Department of Justice‘s Criminal Division, also spoke out about the announcement, stating: “Today, federal law enforcement demonstrates once again that we can follow money through the blockchain, and that we will not allow cryptocurrency to be a safe haven for money laundering or a zone of lawlessness within our financial system. The arrests today show that we will take a firm stand against those who allegedly try to use virtual currencies for criminal purposes.”

Read the full announcement from the Department of Justice here. 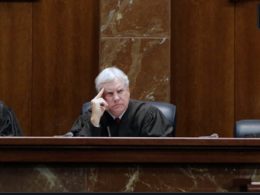 Congress About to Hold a RARE Bizarre Hearing On…

By now, I’m sure everyone is completely aware of the fact that there is a lot going on…
byadmin