It seems that since President Trump left the White House, Democrats have been desperate to find anything and everything possible to put Trump behind bars. It’s funny, especially since every single one of their attempts has failed miserably.

And Democrats’ desperation to catch Trump in something only to fail on their end definitely spells out how fearful they are of Trump returning to office because they know it’ll mean the end of their corruption.

In 2021, a grand jury had granted a span of six months to hear evidence related to a criminal probe of former President Trump as well as the companies he possesses in New York. Well, unfortunately for Democrats, they still do not have enough evidence to prove their outrageous allegations.

The Washington Post reported, Democratic prosecutors formed the grand jury last fall, but no charges having been brought against the former president means the criminal investigation is “fizzling out,” and it is set to expire this week.

In fact, former Democrat New York County District Attorney Cyrus R. Vance Jr. was the first of a long list to bring made-up allegations against President Trump. He had accused Trump of manipulating the values of his properties with the goal of gaining tax advantages and favorable loan rates.

The investigation has continued, up through the end of Vance’s term with no evidence turning up to support his accusations and still no charges brought against Trump.

Presently, the case was re-assigned to Alvin Bragg, who was Vance’s successor. He was left to decide whether he wished to continue presenting evidence and ultimately request a decision on the allegations brought to the grand jury, which he surprisingly decided to pause the process.

A key problem, some of those people said, was Bragg’s concern over whether former Trump fixer Michael Cohen should be used as a witness.

Bragg has said he will announce when the investigation is over, noting that even after the special grand jury disbanded, other grand juries hearing a broad range of criminal cases in New York would be available to take action in this one if needed.

Still, the expiration of the grand jury — and the departure in February of two senior prosecutors who said Bragg was stalling the inquiry — makes any potential indictment of Trump seem unlikely, legal observershave said. By the time Mark Pomerantz and Carey Dunne quit, the grand jury had been inactive for weeks, with jurors being told to stay home, a person with knowledge of the issue previously said.

Meanwhile, Democrat prosecutors in the office of New York Attorney General Letitia James, “are skeptical that any criminal case will be brought, people familiar with the situation said,” adding that “a spokeswoman for James said the investigation continues.”

More details of this report from Conservative Brief:

The AG is running a separate civil probe involving the former president’s business practices. An attorney from her office said last week that a lawsuit may soon be filed in that case. Meanwhile, a judge has held Trump in contempt of court and is fining him $10,000 a day after the former president failed to provide James with records or to properly indicate the nature of his search for the requested documents.

Attorneys for Trump are appealing the court order as well as a ruling by New York Supreme Court Judge Arthur Engoron ordering Trump and two of his adult children to sit for depositions by the attorney general’s office.

“On Friday, Engoron rejected a bid by Trump to purge the contempt ruling after he and his attorneys submitted affidavits. The affidavits ‘fail to specify’ who conducted searches for the requested documents, or where and when searches took place, the judge said. He called Trump’s two-paragraph sworn statement ‘completely devoid of any useful detail,’” the Post continued.

Trump has repeatedly said that his business — the Trump Organization — has operated within the law and above board while accusing the attorney general of engaging in a political vendetta. When she ran for office in 2018, she vowed to launch wide-ranging investigations into Trump, his family, and his businesses.

“We will use every area of the law to investigate President Trump and his business transactions and that of his family as well,” James told NBC News in December 2018.

“We want to investigate anyone in his orbit who has, in fact, violated the law,” said James, who was endorsed by then-New York Gov. Andrew Cuomo.

James campaigned on passing a bill to change New York’s double jeopardy laws with an eye on possible pardons coming out of the White House. James told NBC News she wants to be able to pursue state charges against anyone the president were to pardon over federal charges or convictions and whose alleged crimes took place in the state. Under current New York law, she might not be able to do that. 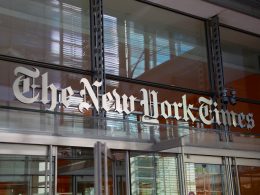 Hulu has launched a brand-new miniseries, ‘The Girl From Plainville’, that raises questions about how writers must portray…
byadmin

Former News Anchor Speaking Out on Why He Abandoned Fox News