Biden’s approval ratings are plummeting. Depending on the survey they hover somewhere between the mid- to upper-thirties. Projections continue to look dim for Biden as the nation faces economic straits with rising gas, fuel, food, and commodity prices, lingering supply chain issues, a chaotic southwestern border, and other issues.

Rising in the democratic party is a weariness to support a sinking ship causing the party to mull over a new scenario: challenging the current president in 2024.

“Unless Biden comes to his senses and announces that he won’t run again, a contentious battle for the nomination seems very likely,” said RootsAction founder Norman Solomon to The Hill.

“The president may not realize or care that the trajectory of his policies has been taking him farther and farther from the Democratic Party base, but his distance from that base would likely be catastrophic for Biden if he tries to get nominated again,” he added.

But this week a new challenger has arrived in political activist Jerome Segal. Segal announced his decision to seek the Democratic Party’s candidacy, disparaging Joe Biden in the process.

“I was planning to delay the announcement of my candidacy until after the mid-term elections,” Segal said in an interview with Newsweek.

“My decision to go public right now was triggered by Joe Biden’s embarrassing trip to the Middle East.”

Segal isn’t known for his wins either as just last week he faced a humiliating loss in the Democratic primary for governor of Maryland.

Segal seems undaunted as he taunts Joe over his actions in the Middle East. How could he ” fist-bump a psychopathic killer,”  Segal said referring to Saudi Crown Prince Mohammed bin Salman. “My main work over the last 40 years has been dedicated to conflict resolution, in particular regarding the Israeli-Palestinian conflict, and I believe we must work in America to reverse the trend toward a new civil war,” Segal said.

“So, I will run against Joe Biden, and I will run on two primary issues:

“How to bring the simple living option to all Americans and how to bring peace to the Middle East.”

In a recent New York Times/Siena College poll only 26% of Democrats want Biden to run in 2024.

94 percent of voters under 30 prefer a different Democrat to run, according to the poll.

“It’s bad,” an anonymous Democratic strategist said, in a report by The Hill. “You have an energy crisis that’s paralyzing and inflation is at a 40-year high and we’re heading into a recession. The problem is simple. The American people have lost confidence in him.”

“Everyone needs to come to terms with the reality that we’re going to get slaughtered in November,” the strategist reportedly continued. “That’s a fact. His polling has gotten worse, not better. It’s indicative of the fact that people have lost confidence in his leadership. There’s nothing they’re going to be able to do.”

They’re Pushing People to Vote…Just to Get LAID

What a Joke: Organization Tries to Defend Their Selfish Purchase 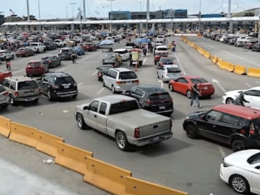 American Citizens are being detained at the southern border and fined up to $5,000 just for trying to…
byKasey Dean