The Daily Mail is reporting that Kimberly Guilfoyle and Donald Trump Jr secret is out; but that’s not all, a source close to the couple says the pair have been secretly engaged for over a year now.

.@kimguilfoyle posted a photo on Instagram of her standing with @DonaldJTrumpJr while celebrating his birthday at Donald Trump’s New Year’s Eve gala on Friday.

In the photo, she can be seen wearing an almost eight-carat diamond engagement ring.https://t.co/6bnV6wZAb9

Secret is out: The Couples History

Kimberly Guilfoyle and Don Jr have known each other for over fifteen years but only became romantically involved during the Trump Presidency. Guilfoyle had left her position on Fox News to become the National Finance Chairman for the Trump Re-election campaign when sparks flew between the two. They have now been together for nearly four years.

Donald Trump Jr. and Kimberly Guilfoyle have been engaged for more than a year, a close source told Page Six on Monday.#JustTheNews @DonaldJTrumpJr @kimguilfoyle https://t.co/FFhq12uVIz

Don supposedly popped the question on New. Years Eve 2020, which is also his birthday. The speculation of an engagement rampaged through the rumor mill after Guilfoyle flashed an 8-carat diamond ring soon after the New Year festivities.

“‘Don and Kim got engaged on New Year’s Eve 2020 — which is Don’s birthday. They’ve been together for almost four years now and have been friends for 15 years,’ an insider told the website.”#Guilfoylehttps://t.co/9ZmoannU7s

The source for the Daily Mail said: “They’ve kept it private for the past year as they settled into life in Florida after moving from New York,’ the source added. ‘Both are focused on their children – they have six between them – and their work.’

The freedom-loving couple plans to spend their lives in Florida since selling Guilfoyle’s Manhattan apartment, at $4.4 million, and the Hamptons home they shared, for $8.1 million.

Donald Trump Jr. and Kimberly Guilfoyle got engaged. What will their wedding theme be? pic.twitter.com/a51REnKXuc

Recently Guilfoyle has added fuel to the fire to the rumor of a secret engagement as she posted on Instagram a picture of them together. The caption read: “I Can’t wait to spend the rest of our lives together.” 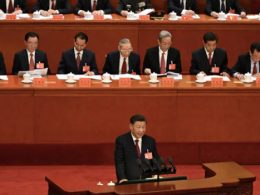 CCP Takeover Claims Its Next VICTIM

Xi Jinping, President of the People’s Republic and Leader of the Chinese Communist Party and Paramount Leader of…
byStaff Editor