GOP foreign policy leaders in Congress are pushing the Biden administration to take stronger action against Russia, telling them that they need to enact another wave of sanctions against the country, including measures to ban all of Moscow’s banking institutions from accessing the international financial system.

Sixteen lawmakers — led by Rep. Pat Fallon (R-TX), a member of the House Armed Services Committee — wrote to the White House late Monday, demanding that a new wave of much tougher sanctions be enacted against Moscow, according to a copy of the letter that was obtained by the Washington Free Beacon.

The GOP lawmakers are arguing that the Biden administration must implement sanctions that would stop all Russian banking institutions from accessing SWIFT, which is an international financial system that most of the world relies on to conduct transactions. If Russia is disconnected from SWIFT, it would effectively cut its economy off from the rest of the world and deal a massive blow to the country’s president, Vladimir Putin.

“Your initial sanctions package coordinated with your G7 counterparts failed to include the removal of Russia from the Society for Worldwide Interbank Financial Telecommunication (SWIFT) system. While the second round of sanctions included actions related to SWIFT, the Central Bank of Russia (CBR), and Russia’s oligarchs, it failed to implement full blocking sanctions on the CBR, disconnect all of Russia’s banks from SWIFT, and target all of Russia’s oligarchs,” the lawmakers’ letter reads. “We need strong secondary sanctions on all Russian banks, and we need the complete removal of all Russian banks from SWIFT. We cannot afford half-measured sanctions and we urge you to pursue these actions to the fullest extent possible.”

The letter comes as Republicans in the U.S., along with other world leaders, including Ukraine’s president, call for actions to be taken to deal Russia a crippling economic blow for the invasion of Ukraine. As Russian troops move deeper into the country and threaten to seize the Ukrainian capital of Kyiv, demands for actual tough sanctions have grown louder. The letter from Rep. Fallon and his GOP colleagues codifies many of the toughest measures that can be taken against Russia short of war.

“If Russia wants to act like a pariah, they should be treated as such,” Fallon told the Washington Free Beacon. “Right now, there are only two countries in the world that are completely cut off from the SWIFT electronic banking system—Russia needs to be the third. While the actions undertaken by this administration have been a step in the right direction, they are not enough. We need to financially isolate Russia from the entire world.”

Russia’s banking sector relies on the SWIFT financial system for tons of transactions, including the country’s multibillion-dollar export of hydrocarbons, the lawmakers stated in their letter. The loss of these hydrocarbon sales would reduce Russia’s GDP by at least 5 percent, according to the country’s former finance minister.

“This is exactly the type of response that would deliver a devastating blow to the Kremlin and is desperately needed,” the GOP lawmakers’ letter reads. “It is important to note the current sanctions regime allows Russian energy transactions to keep going through non-sanctioned banks that are not based in the United States. This is unacceptable, and we must instead pursue complete economic isolation for Russia.”

Disconnecting Russia from the SWIFT financial system would also stop the country from performing international financial transactions, which is certain to further crush the country’s economy. It also would “trigger currency volatility, and cause massive capital outflows,” according to the GOP lawmakers.

The congressmen also argue that further sanctions must be applied on Russia’s lucrative mineral trade, its timber sector, and its plastics and polymer industry. They also state that Russian oil and gas payments performed with other nations should additionally be placed in blocked escrow accounts, which would prevent Moscow from accessing the funds.

“Mr. President, this is what accountability looks like,” the lawmakers write to Biden. “Do what is necessary and project strength. Work with our European allies and send a crippling message to this autocratic regime—no more half-measures.”

Rep. Don Bacon (R-NE), a member of the House Armed Services Committee who signed onto Rep. Fallon’s letter, told the Washington Free Beacon that these sanctions must not be delayed.

“Putin is tyrannical and bull-headed and the only way to show him that the rest of the world means business is to kick them out of SWIFT completely,” Bacon said. “While the measures taken so far by the president are good, they are not near enough. Financial isolation will make a huge impact on Russia’s already-impacted financial situation.”

“Even more important is ensuring that the Biden administration properly enforces these sanctions so the Kremlin and its western henchmen—Diaz-Canel, Ortega, and Maduro—are fully cut off from the world economy,” she told the Washington Free Beacon. “The United States has a commitment to protect freedom and democracy around the world, and with that comes an obligation to punish those who threaten it. Now is not the time for us to show weakness. Doing business with the United States is a privilege, not a right …  and the United States should not do business with dictators.”

Congress Set to Hold an Obscure Meeting About…

By now, I’m sure everyone is completely aware of the fact that there is a lot going on…
byStaff Editor 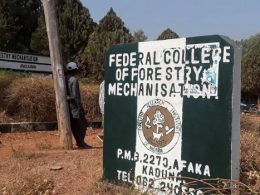 His Wisdom Joe Biden and the Imperial Palace are dead silent after yet another 30 students were abducted.…
byMark Megahan
No comments

Ding! The notification alarm reaches your ears and instantly your palms sweat. You glance at your screen, heart pumping,…
byStaff Editor