Transgender inmate, Cristina Iglesias has spent their entire adult life inside federal prison. Back in 1994, Iglesias was arrested and sent to prison for sending death threats to federal judges, only to plead guilty later on in 2005 to forwarding fake anthrax to U.S. allies in the earliest days of the War on Terror.

Fast forward to present day and the inmate has been approved by a judge to become the first transgender inmate to undergo sex-reassignment surgery. Here’s the catch though: it’s on the taxpayer dime.

Iglesias in 2020 came to be the poster child of the American Civil Liberties Union‘s mission to make sure the absolute most hardened thugs receive transgender rights.

Now, this group that once focused on free speech has sued the government, claiming that denying  surgical treatment is an offense of Iglesias’s civil liberties. U.S. Area Judge Nancy J. Rosenstengel is on the side of the civil rights group, offering her opinion that “Iglesias suffers daily and is at risk of self-mutilation and suicide.”

47-year-old Iglesias’ release date is on Christmas Day of this year, but has expressed a desire to have the surgery before that time–and Rosentengel has ordered the Bureau of Prisons to locate a doctor to carry out the procedure, which is expected to be incredibly pricy according to rough estimates.

Thanks to Biden’s policy, prison officials are required to refer to inmate’s by their preferred name and pronouns in addition to considering housing for transgender inmates that match their “lived gender.” And while the policy doesn’t require surgery for inmates, this leftist group ACLU are pushing to make that a reality. A Bureau of Prison spokeswoman has confirmed over 1,300 transgender inmates in federal prisons across the country.

Iglesia’s defense team has connected their crimes to an extensive history of mental illness, which includes compulsive and self-destructive behavior that is challenging for a person to manage on their own.

“The subject’s history and the results of this evaluation suggest that his behavior is influenced by the existence of severe psychological deficits that are of long-standing duration,” Dr. Jethro Toomer wrote in the 2005 assessment.

Defense filings share that Iglesias has been diagnosed and treated for bipolar disorder, schizophrenia, borderline personality disorder as well as an addiction to alcohol since they were young.

In 2015, the Federal Bureau of Prisons approved hormone therapy, however later on Iglesias pushed for facial laser hair removal, a transfer to a female facility and “gender confirmation surgery.”

It was in 2019 when Iglesias decide to sue the Bureau of Prisons without counsel and now a year and a half later, the ACLU and Chicago legal team Winston & Strawn LLP have joined and taken over the case on the inmate’s behalf.

“To Ms. Iglesias, her genitalia feel like an abnormal and life-threatening growth on her body, like a malignant tumor from cancer that needs to be removed,” the lawsuit reads.

The Bureau of Prisons asserted in court filings that they have never opposed the steps for Iglesia’s transition, noting multiple instances where they attempted to accommodate the inmate.

Rosenstengel stated the Bureau of Prisons breached Iglesias’s civil liberties and accused them of utilizing its prison rape rationale in reaction to the ACLU lawsuit.

The judge pushed for Iglesias’s to have the surgery completed but is “running out of time,” likely referring to a government-funded sex change.

Though it is unclear when Iglesias will receive the surgery, the inmate has brought along numerous other problems for the bureau including “unsubstantiated” allegations of violence and forced prostitution on another inmate as well as incurring debt with other inmates while attempting to purchase drugs.

The Bureau of Prisons stated it would not talk about matters based on the legal process. The ACLU did not respond to a request for comment. 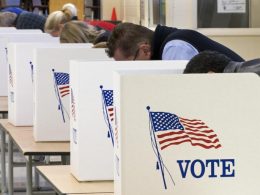 Taylor Lee, an FDA Economist gave insights into the Biden-Harris regime’s views on COVID vaccination mandates in a…
byStaff Editor

The entire left has a real problem on their hands right now. What makes it even better is…
byStaff Editor

Candidate for Arizona’s 9th Congressional District Alex Stovall has run into a campaign-ending problem… Apparently, he finds his…
byadmin

Taylor Lee, an FDA Economist gave insights into the Biden-Harris regime’s views on COVID vaccination mandates in a…
byadmin