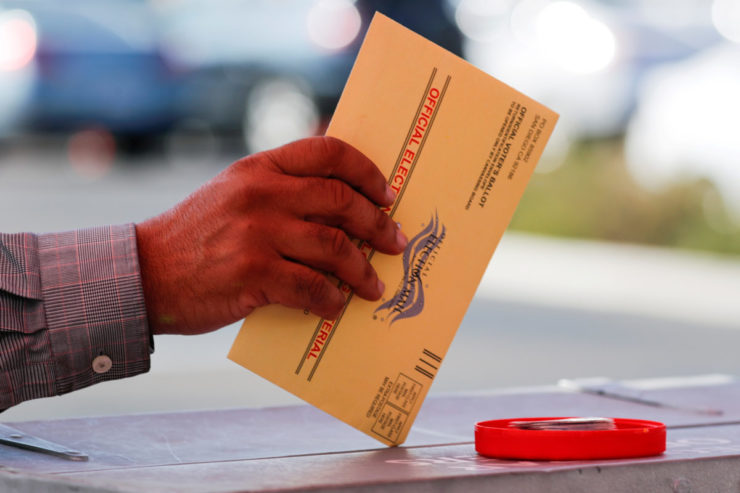 Isn’t it absolutely hilarious that the Dems cult actually believe they can get away with the 2020 election fraud that easily? Well, the joke is on them, as they’re on the way to being caught red handed and sent to prison.

Arizona’s Attorney General Mark Brnovich has released an update on the status of his investigation of the “audit” which was completed for Maricopa County’s election results.

It seems AG Brnovich has gathered some ideas that Maricopa County demonstrated “serious vulnerabilities” in its management of the 2020 presidential election.

Having this in mind, an interim report was immediately sent over to AZ Senate President Karen Fann which included the findings from the Maricopa County forensic audit for the 2020 presidential election. Brnovich’s findings have caused him to call for criminal prosecutions, as detailed in his report.

“Our team of EIU investigators and attorneys has now collectively spent thousands of hours reviewing the Senate’s audit reports and other complaints, conducting interviews, and analyzing Maricopa County’s election system and processes.”

Unfortunately at this time, the investigation of the voter fraud crimes committed is still ongoing and thus Brnovich is not at liberty to disclose the specific criminal and civil investigations.

Detailed in his letter to Senator Fann, AG Brnovich’s officer made the shocking revelation that the EIU discovered individuals that committed voter fraud, saying “they have been or will be prosecuted” for “various election crimes.”

Here is a small portion of the report that talks about the broken signature verification process. In Maricopa Co, there were 206,648 early ballot affidavit signatures (an ave. of 4.6 seconds per signature), leaving the system vulnerable to error fraud and oversight issues.

Given the issues the EIU faced in obtaining election records in a timely matter, the report is recommending that laws be changed to allow immediate production of election records when requested by the AZ attorney general.

The report recommends that the law be amended to include individuals who vote early and provide an ID when voting. They are also asking for more specific requirements for signature verification.

The report also found serious issues with the transportation of ballots from dropbox locations to election headquarters. The report estimates between 100,000 and 200,000 ballots were transported without a proper chain of custody. Additionally, the report claims no election protection measures exist for the chain of custody in the upcoming 2022 elections.

100 Percent Fed Up shared more on its report:

Brnovich wants to ensure the current law that went into effect on Sept 29, 2021, which makes it unlawful to use private or non-governmental grant money to prepare, administer or conduct elections in AZ, is being enforced. The report found that almost $8 million in private, non-governmental grand money was given to targeted counties (Democrat strongholds) under the direction of Democrat Secretary of State Katie Hobbs in the 2020 election. The AZ AG promised to continue their investigation into where that money was spent in the 2020 election, saying their initial review “raises serious questions about where that money was spent.” The Auditor-General should be given the ability to conduct future audits of elections and supply reports to the AZ legislature.

AG Brnovich’s interim report asks for an increase in penalties for election crimes, specifically for widespread ballot harvesting and for tampering with ballot drop boxes, and to strengthen protections for whistleblowers. Finally, the interim report points out that the ultimate goal of the interim report is to restore confidence in Arizona’s elections irrespective of party affiliation. The Bush v. Gore election is used as an example of how Democrats spent “years in an uproar” over the results of the 2000 election.

Over 24 States Monitored by DOJ During Election