According to the bombshell Newsweek report, the FBI had a mole working on the inside providing them details on where allegedly classified documents were on the premise.

The mainstream media took extreme measures to make it look like the documents were about the Presidential Records Act and not an act of political retribution from the White House which would have been a dramatic escalation in the war on Trump.

Anonymous officials were cited in the report, who shared that the feds were given tips from a confidential informant “who was able to identify what classified documents former President Trump was still hiding and even the location of those documents.”

Newsweek continued in the report to state that “the raid was deliberately timed to take place in the absence of Trump,” stressing that “the raid was not politically motivated, and that the FBI is only intent on recovering top-secret documents illegally extracted from The White House”.

Once the GOP and Trump received word about the raid, of course the FBI suffered significant backlash.

“They wanted to punctuate the fact that this was a routine law enforcement action, stripped of any political overtones, and yet got exactly the opposite.” Said a Senior Department of Justice official.

Interestingly, government officials have claimed that the raid was not connected to the January 6th hearings or other investigations into Trump.

So essentially we are led to believe that the FBI conducted a raid on Donald Trump for overdue books?

Even Andrew Cuomo, the former Democrat Governor of New York, admitted that the raid was a “political tactic” if it was simply conducted over recovering “inconsequential archives”

DOJ must immediately explain the reason for its raid & it must be more than a search for inconsequential archives or it will be viewed as a political tactic and undermine any future credible investigation & legitimacy of January 6 investigations.

Here’s an excerpt from Newsweek’s Report:

“The effort to keep the raid low-key failed: instead, it prompted a furious response from GOP leaders and Trump supporters. “What a spectacular backfire,” says the Justice official.

“I know that there is much speculation out there that this is political persecution, but it is really the best and the worst of the bureaucracy in action,” the official says. “They wanted to punctuate the fact that this was a routine law enforcement action, stripped of any political overtones, and yet got exactly the opposite.”

“They were seeking to avoid any media circus,” says the second source, a senior intelligence official who was briefed on the investigation and the operation. “So even though everything made sense bureaucratically and the FBI feared that the documents might be destroyed, they also created the very firestorm they sought to avoid, in ignoring the fallout.”

This report actually brought on more damage to Biden’s regime, as it revealed the insidious motive behind this ridiculous incident.

If Trump is convicted of violating the 1978 Presidential Records Act (a felony), he will be ineligible to be POTUS. https://t.co/pDILiqlCuM

The government will likely go on to accuse Trump of a violation of the 1978 Presidential Records Act.  The act specifies that someone who violates it cannot hold office.

“Whoever, having the custody of any such record, proceeding, map, book, document, paper, or other thing, willfully and unlawfully conceals, removes, mutilates, obliterates, falsifies, or destroys the same, shall be fined” $2,000, up to three years in prison or “shall forfeit his office and be disqualified from holding any office under the United States.”

After two failed impeachment attempts, a special investigation that was cooked up by DNC attorneys, and the ongoing January 6th circus, they will try to disqualify Trump from being President again over a minor process violation.

Congress Set to Hold an Obscure Meeting About…

By now, I’m sure everyone is completely aware of the fact that there is a lot going on…
byStaff Editor

MyPillow, Inc. is striking back against Dominion Voting Systems and continuing the struggle for the United States. The…
byadmin
One comment 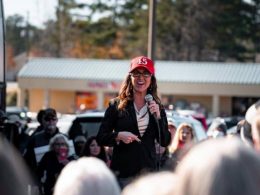