What if the GOP at the State level in multiple states were ‘In on it’ during the 2020 Election, as  it unfolded. Or if they merely knew about the ongoing efforts to compromise the vote and did nothing to stop it and have since stymied efforts to investigate it. Emails uncovered in January 21′ paint a very disturbing picture.

Emails that were leaked to Big League Politics have uncovered,

“The reason behind this Republican cover-up may be due to the extreme levels of incompetence and failure exerted by the GOP establishment.

Big League Politics obtained the correspondence from Jan. 22 in which one exasperated attorney described how the state of Michigan was woefully unprepared for election fraud that was plotted in the open many months in advance.”

“Sure the Democrats lied and cheated to win but the truth is that they out smarted (sic) us. They set the table in the courts before the election so they could do what they do so well. We got played. Now we know what is coming next time,” the lawyer stated.

“Instead of us organizing a few weeks before 2022 we need to start now,” they added.

The email chain centers around the Michigan GOP and their expensive legal team seeming to completely blow it on every facet of their task, from actual Election Day Ops to efforts to uncover the irregularities and potential fraud once they occurred.

“The effort in Detroit smacked of last minute preparation or no preparation at all. People arrived and were offered no direction. There was no set of guidelines on election law. I pressed to get a copy of the Michigan Secretary of State guidelines but we had no copier at the office. I had 60 copies made at my hotel and gave them out,” the attorney explained.

“From day to day we had little idea of what to do. Making calls to voters is a great idea but did we really need to fly lawyers in from all over the US to do that? That could have been done by anyone. It was a waste of talent and money,” they added.

The lawyer brought in by the RNC expressed hope that the Michigan GOP and other state Republican parties improve their organization in later elections and expressed that they would be willing to lead the efforts to ensure they aren’t as poorly handled as they were in 2020.

“Next time we do this lets (sic) have written materials in advance. Lets (sic) have a greeter to orient people. Tell people ahead of time that they needed a google account. Have a tech person there to help those who were born before 1980. Have a printer and a coffee maker that works. Have local maps. Have a hotel closer to the office,” the attorney wrote.

“I have done this before for many years… I knew what to look for. People need to be trained in how to be a poll watcher. I am ready to begin work. Lets (sic) get our act together. Thank you to all of you for what you did. You are patriots and can be very proud,” they wrote to conclude their email.

It can be easily discerned from these emails that prominent figures on the ground in Michigan were completely aware of what was taking place, leaving the incompetence on the floor we’re forced to come to the conclusion that institutionally the Republican party was aware of the irregularities and potential for fraud and made the strategic and cowardly choice to simply lick their wounds and do better next time rather than fight for the American people. Shameful. 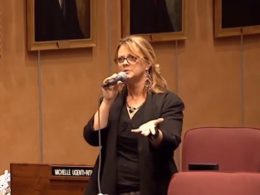 It was a ham-fisted attempt at a power-move, a shear breakaway from the ultra-negative rhetoric that has punctuated…
byMatthew Holloway