Scientists have been left baffled by large holes discovered 1.7 miles beneath the Atlantic Ocean.

The National Oceanic and Atmospheric Administration’s (NOAA) Okeanos Explorer ship made the discovery.

As a result of the mysterious find, many scientists are turning to online users to ask who or what they think caused the holes to form.

The NOAA shared on Facebook: “Okay Facebookers, time to get out those scientist hats!”

“On Saturday’s #Okeanos dive, we observed several of these sublinear sets of holes in the sediment,” the NOAA added. “These holes have been previously reported from the region, but their origin remains a mystery.”

“While they look almost human made, the little piles of sediment around the holes make them seem like they were excavated by…something.”

Then, NOAA questioned: “What’s YOUR hypothesis?”

“Molusk of some sort under the sand blows out a vent then slowly moves along blowing another vent when it rests,” one user hypothesized. 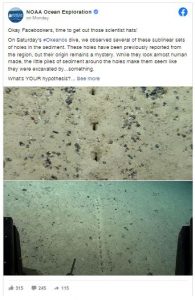 “Previous dive ROV tracks?” one user wrote, to which another replied: “No, they aren’t very long, there’s no equipment (exploration or fishing) that would only be on the bottom for 20′. They were scattered all over and they were not aligned in anyway.”

“Looks like impact craters around the holes, something landed and then created the hole? another user wrote. “Something that bounces across the bottom, they seem almost the same distance apart from each other.”

Yet another commenter said, “I wonder if some company may be conducting sea floor samples. That might explain the straight lines and the spacing of the holes. Especially if you have seen others in the region.”

More details of this report from The Western Journal:

The Saturday pictures were taken during the second NOAA journey in the Voyage to the Ridge 2022 series.

The three-part series — which started on May 11 and will end Sept. 2 — will involve telepresence-enabled expeditions “to collect critical baseline information and improve knowledge about unexplored and poorly understood deepwater areas of the Charlie-Gibbs Fracture Zone, Mid-Atlantic Ridge, and Azores Plateau,” the NOAA said.

The NOAA ship Okeanos Explorer will take part in the voyages, the last of which is scheduled for Aug. 6 to Sept. 2.

The ship’s first voyage in the series was from Newport, Rhode Island, to St. John’s, Newfoundland, between May 14 and June 7.

Its second voltage is from Norfolk, Virginia, to Horta, Faial, Azores, Portugal, between July 9 and July 30.

As part of its third voyage, the vessel will sail from that location in Portugal to San Juan, Puerto Rico.

The NOAA is conducting mapping operations around the Charlie-Gibbs Fracture Zone, Mid-Atlantic Ridge, and the Azores Plateau in the North Atlantic Ocean in an attempt to solve the mystery.

“Voyage to the Ridge 2022 will yield data to help scientists understand the diversity and extent of deep-sea coral and sponge communities along the Mid-Atlantic Ridge, Azores Plateau, and Charlie-Gibbs Fracture Zone,” the NOAA said.

“We will investigate biogeographic patterns of deep-sea ecosystems and connectivity across the Mid-Atlantic Ridge, Azores Plateau, and Charlie-Gibbs Fracture Zone for use in broader comparisons of deepwater habitats throughout the Atlantic Basin.”

The voyage also will help researchers “improve knowledge of past and potential future geohazards,” the agency said.

The RED WAVE Is Coming to This State

A new Trafalgar Group/Daily Wire poll has revealed a doomsday scenario for Democrats in Arizona. The newest poll…
byStaff Editor

Mircales can happen even on election day. In an incredible upset for the House Democrats, Republican Mike Lawler…
byKasey Dean

Biden Allows Putin To Use American Prisoners As Political Pawns

What is the Biden administration thinking? Senior Staff has proposed trading a Russian arms dealer that is spending time…
byStaff Editor