The wind blows gently across the rolling hills hidden beneath endless fields of green and gold corn.  A soft sound drifts out of the open windows of an elementary school. It’s the pledge of allegiance being carefully recited by a class of second-graders. “One Nation, Under God, In-di-vi-si-ble, With Liberty and Justice For All”.

KCRG in Des Moines report that Iowa lawmakers are debating a bill that would require students to say the pledge of allegiance each day at school. The bill, House File 415 would also require schools to display the flag in the classroom while students recite the pledge.

NBC affiliate KWWL adds that the law requires “accredited and non-accredited K-12 schools to show the flag and administer the pledge to 1st-12th grade students every day. Schools would also be required to fly the U.S. and Iowa flags on all school days when weather permits.”

The bill passed the Iowa House by a 91-3 vote. It now heads to the Senate for approval. 22 year old Iowa Representative Carter Nordman (R-Dallas County) gave his closing statement on HF415,

“What makes this country so great is that we can be on opposite sides of the political spectrum, we can disagree and we can hove those debates.

But at the end of the day, we all know that we are united under one flag and that’s why I believe the Pledge of Allegiance is so important .

Representative @CarterNordman's closing comment on HF 415 showcases that regardless of politics, the Pledge of Allegiance unites us all as Americans. This bill passed with a bipartisan vote of 90-3! 🇺🇸 #ialegis #iagop pic.twitter.com/uHUyCW89VQ

Democrat Rep. Bruce Hunter Spoke Out Against The Pledge

“it’s important to teach kids about what makes America great, but also what America’s faults are.

“Patriotism, in my mind, is sticking up and saying that it’s not OK to kneel on our brothers for eight minutes until he is dead,” Hunter said. “Speaking up is being a patriot.”

Hunter then said he knows the bill says students will recite it voluntarily, but noted that “in reality, it’s not voluntary.”

“Kids in grades kindergarten through 12th grade are probably some of the meanest people in the world,” Hunter said.

He then defeated his own premise “And this is coming from somebody that doesn’t have any kids.” 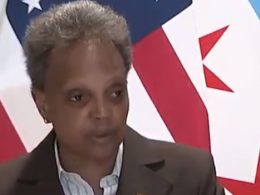 Sara Tirschwell was aiming to become the first woman to lead America’s largest city last year. She was…
byMatthew Holloway