Here’s a new idea from President Joe Biden: he has pushed suggestions to ban “high-caliber assault rifles” as a “rational” gun control option.

Additionally, he repeated a false claim that “you couldn’t buy a cannon when the Second Amendment was passed.”

While speaking with reported outside the White House, President Biden was pushed to answer questions regarding potential gun control measures.

“It makes no sense to be able to purchase something that can fire up to 300 rounds,” Biden said. “The idea of these high-caliber weapons — there’s simply no rational basis for it in terms of, about self-protection, hunting and I guess — and, remember, the Constitution, the Second Amendment was never absolute. You couldn’t buy a cannon when the Second Amendment was passed. You couldn’t go out and purchase a lot of weaponry.”

Joe Biden: “The 9mm bullet blows the lung out of the body.”

“The idea that these high caliber weapons…. There’s simply no rational basis for it in terms of self-protection.”pic.twitter.com/2DgaDWJLpt

Previously, Biden had made a comment about owning a cannon during the Revolutionary War during his presidential campaign, which he again brought up not long ago.

Joe Biden repeats the lie that you couldn’t own a cannon when the second amendment was passed.

He says this all the time and it’s still not true. pic.twitter.com/x88GpHxjwo

Pres. Biden on gun reform and the 2nd Amendment: ‘When the amendment was passed, it didn’t say anybody could own a gun … and any kind of weapon. You couldn’t buy a cannon!’ pic.twitter.com/qWZLZWeQbL

Hilariously enough, however, his claim is incorrect. The Second Amendment never has placed limits on cannon ownership, in fact, it doesn’t mention limiting ANY form of weaponry.

All that it states is, “a well regulated militia, being necessary to the security of a free state, the right of the people to keep and bear arms, shall not be infringed.”

Politifact has deemed his statement false, and yet he continues to make it.

Recently the president and First Lady Jill Biden visited the families of the elementary school shooting in Uvalde.

As the Biden’s left mass at a local church, protesters chanted at the president to “do something,” to which he replied, “we will.”

Woman Sent Back a Bad Meal, Hired Lawyer After Examining Her Receipt 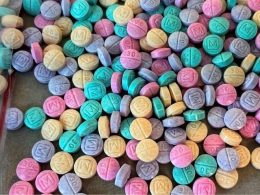 A 13-year-old junior high school student was arrested on Sept. 9 in California. His crime was bringing to…
byadmin