San Francisco is such a lawless city that hijackers don’t care who’s ride they try to steal, even if it belongs to a cop. One would-be thief is behind bars for a while. Probably not a long while, though.

A “22-year-old male” made a big mistake on Tuesday, when he tried to carjack an off duty San Francisco cop. Just before 11 a.m., near San Francisco State University, the unnamed assailant “approached the off-duty officer.” Things didn’t go as planned.

“When the officer identified himself and tried to detain him, the suspect fled into a building.” He wasn’t getting away that easy. The thug would be going after somebody’s grandmother next. “The officer took chase and found the suspect hiding on a balcony.” He was arrested without incident.

To CBS news, that’s the end of the story, underscoring how commonplace these sorts of incidents have become. It didn’t start when the cop saved his own bacon in the parking lot and didn’t end when he threw the would be socialist in a cell, for trying to share his wealth.

Just before 11AM today a Suspect tried to carjack an off-duty #SFPD Officer in 500 blk of John Muir/Lake Merced. The off-duty officer identified himself & tried to detain the S. S ran on foot, off-duty chased him to a building, a 22 y/o male was taken into custody without pic.twitter.com/8jcOICS41i

Society itself has broken down to the point where it’s easier to steal someone’s car at gunpoint than it is to take an Uber. Nancy Pelosi’s jurisdiction isn’t the only one with problems, either.

At the heart of the issue is lack of law enforcement. Police have been defunded and demoralized. Not only does every cop have a big target painted on their back, every time they arrest someone they get dragged into court.

There may or may not be a trial for the suspect they arrested, because liberal prosecutors don’t like to prosecute anyone, unless they’re Republican. The cop is the one who ends up on trial, more times than not. Every time they slap the cuffs on someone, the ACLU files a corresponding lawsuit.

Liberal Democrats are horrified by the number of colorful people locked behind bars in prison. Instead of addressing the root causes of why a disproportionate number of criminals have minority demographics, they let everyone out of jail and fire every cop.

That levels the playing field to make things fair. Fair for everyone but the next grandmother who doesn’t have a badge who gets carjacked.

Since poor people steal what they need from the store and minorities are usually poor, the ones stealing from stores are mostly minority types. That makes the law against theft inherently racist, liberals argue. Their solution? Don’t prosecute theft.

In the state of confusion called California, they won’t do a thing until you swipe $950 worth of goods from any one store in a single trip. The cop working security may have to hold the door open for you but he does it with a disgusted look on his face.

Our so called “representatives” in congress don’t represent anyone but themselves and the special interest groups who help them accumulate millions, despite their meager salary. One cop after another is walking off the job as their contracts expire and they reach eligibility for retirement.

There aren’t any new ones coming in to take their place because young people have all been brainwashed into thinking that enforcement of laws is wrong and anyone who does it should be eliminated. One way, or another. 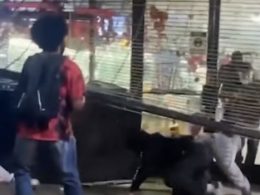 Nothing says ‘leftist city in the Superbowl’ quite like lawlessness, violence, rioting, (whether their team wins or not…
byadmin

During a segment on Fox News’ The Five, co-host Jesse Watters slammed speeches by Joe Biden and Kamala Harris,…
byadmin

It Was a MURDER-SUICIDE…

An absolute horror story has emerged out of Florida. A man killed his wife, then slit his throat…
byStaff Editor