Kristina Karamo is a Christian conservative adjunct professor in a small Christina Collge in Michigan. She is also a single mother of two. Her life and character make her an unlikely candidate to get the coveted endorsement of the 45th President of the United States.

This Thanksgiving I reflect on how thankful I am for God’s blessings: the sacrificial love of my Lord & Savior Jesus Christ, good health, supportive family and friends, and living in the United States of America. Never lose sight of all that you have to be thankful for. #blessed

But get the endorsement she did. Karamo is a republican candidate running to be Michigan’s next Secretary of State. If she achieves this goal, she will be the first Black woman to hold the office.

It’s my honor to have been endorsed by great American patriot and President Donald J. Trump for the office of Michigan Secretary of State. I’m running for this office not as a politician but as a servant-leader. #MichiganFirst pic.twitter.com/t6Y9wzCAMe

An Unlikely Candidate on a Mission

Karamo first grabbed the public’s attention when she testified in front of Michigan’s State Senate as a Republican poll challenger. The Election fraud she witnessed had to be brought to light and Kristina Karamo was up for the fight.

According to Karamo, a vote came in with both presidential candidates filled out on the ballot, but administrators counted it for Biden instead of throwing the vote out. According to Michigan state law, this is illegal.

A white male, shooting three white males, one being a child rapist is an example of white supremacy; but calling me a n**ga and hoping I get beat and lynched is ok? That’s the American Left! Stop drinking the Marxist kool-aid. #BLM #CNN pic.twitter.com/D804WttPn1

“The poll worker then said, ‘I think I’m gonna give it to the Democrats’. That’s absolutely absurd,” Karamo stressed. “That is illegal. The vote should have been tossed out. At that moment, I said absolutely not, I’m gonna challenge this. So, I go get her supervisor. And then her supervisor defers to her and says ‘well what do you think’? And I’m like, what do you think? It doesn’t matter what you think. It’s the law.”

So, @JocelynBenson how do dead people get added to the Qualified Voter File AFTER they died? Michiganders need to watch this case. If dead people are added after death, that is fraud, and people need to be held accountable. #breaking https://t.co/zLth0aVanC

Karamo understands that so many Michiganders feel their vote no longer matters. This is why she feels compelled to run and clean up a system that is busier covering for the corrupt than working for the people.

She also understands that being a firebrand isn’t always the right tactic. She will have to win over and change the minds of many Michigan citizens that may not think the same way as her or even be passionate about the same thing she is.

This is a public safety issue! When police look for suspects identity of male/female is critical. Ignoring the reality of sex caused rape in a Virginia school. He claimed“gender-fluidity”wore a dress, allowed in the girl’s bathroom, raped two girls, and the school covered up both pic.twitter.com/ojQxoNn8sa

“One of the things that I’ve tried to be very cognizant of, you know, I’m running a statewide race. And I understand I have to win the hearts and minds of people who may not necessarily think like me,” Karamo stated. 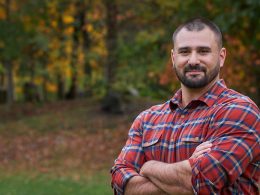 Sunday Devotional: Understanding and Wisdom in a Chaotic World

By wisdom a house is built, And by understanding it is established;  And by knowledge the rooms are…
byKasey Dean