The group Anonymous have recently announced their newly developed attack against Vladimir Putin and his invasion of Ukraine by hacking into another government run website.

It is understood that this time around, the group has hacked into the website of the company believed to be running the Ukrainian power plant that was taken over by Russia, which definitely left an obvious message to the employees.

#Anonymous hacks into Russian firm nuclear plant.
*Anonymous defaces Rosatom website, starts to leak gigabytes of data* 🤓 (link to data in article: we can't post the link because Twitter is mean to us sometimes).https://t.co/2uxp0yafen

The International Atomic Energy Agency (IAEA) was notified by Ukrainian officials that Russia had already put arrangements in place to have the Zaporizhzhya Nuclear Power Plant placed under the full management of Rosatom, the state nuclear energy firm.

Russian forces seized the Zaporizhzhya site, otherwise known as Europe’s largest nuclear power plant, on March 4. At the time, there had been international concern of a potential nuclear accident due to a fire breaking out, which was later extinguished.

Anonymous also made claims that it had taken out Russia’s national security agency by stating on Twitter: “Russian sites under attack [Tango Down],” which in military slang means that an enemy was successfully defeated in combat.

This comes soon after Anonymous had forwarded Putin a chilling warning telling him his ‘secrets may no longer be safe’ when they first launched a cyber offensive. 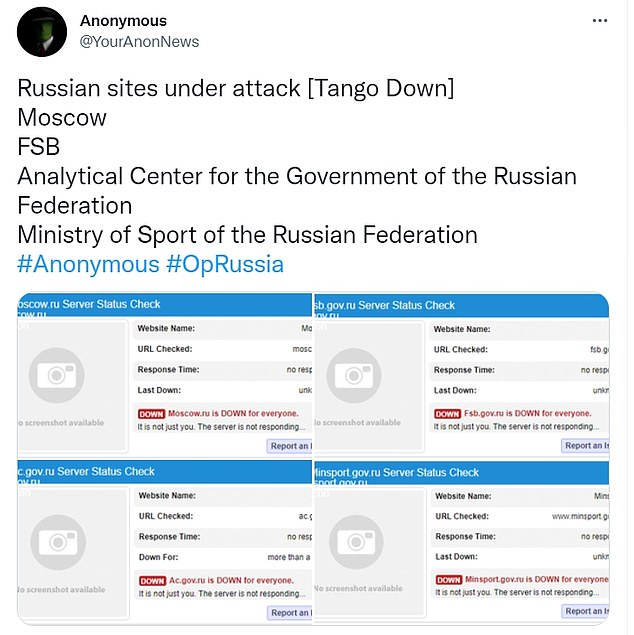 “The group of hacktivists took to Twitter to announce the websites they had successfully brought down, including FSB, the Russian intelligence service. They also leaked private correspondence between Vladimir Putin and Russian defense minister Sergei Shoigu, outlining plans to cut down Ukrainian forests and sell onwards.”
Credit: The Daily Mail

More hacking from Anonymous was reported by The Daily Mail:

Last week, Anonymous claimed to have hacked into Russia’s media censorship agency and released 340,000 files from Roskomnadzor federal agency, stealing classified documents which they then passed on to transparency organization Distributed Denial of Secrets (DDoSecrets), who published them online.

The trove of 820 gigabytes of emails and attachments, some of which are dated as late as March 5, shows how the Kremlin is censoring anything referring to their brutal invasion of Ukraine, which Moscow is instead calling a ‘special military operation’.

The Anonymous hacker said they ‘urgently felt the Russian people should have access to information about their government’, DDoSecrets said.

The files relate to the Russian republic of Bashkortostan, one of the largest in the federation with a population of four million.

Look at What They are Doing to This America First Rep