A North Carolina restaurant has gone viral after the owners faith policy has been made known. People take notice when the power of prayer is involved and the owner, Mary Haglund, of Mary’s Highend Diner is no exception, even adding something special to your bill.

Mary Haglund confirmed that her establishment gives a 15 percent discount on bills for “praying in public.” She actually has been offering the discount for several years at her Winston-Salem, North Carolina diner.

“For me, every plate of food is a gift,” she explained. “And, I never take that for granted, and when I see someone in a restaurant honoring their gratefulness at my table … it touches my heart.”

Haglund doesn’t force her beliefs on any of her staff. If any of the wait staff is uncomfortable or disagrees with it, they aren’t forced to give the discount. In fact, Haglund has never advertised the discount. Rather, it’s something staffers offer only when they feel compelled to do so.

“It’s just a moment or faithfulness about the plate of food,” Haglund explained. “It’s not even a policy — it’s something we only do when we’re moved to do it.”

Haglund, who is the daughter of a preacher and missionary, lived in the Philippines as a teen. It’s where she saw a true need. “We are so fortunate in this country,” she said.

Though, Haglund says she fell away from her faith as she grew older, she still describes herself as a spiritual person who believes in a higher power.

Jordan Smith, who had traveled to Winston-Salem for a business trip and stopped for breakfast at Mary’s with two colleagues one Wednesday morning,. She is responsible for the sudden popularity of the diner’s discount. Smith posted a photo of her receipt to Facebook after receiving the discount when she and co-workers prayed over their meal.

The receipt soon made its way onto Z88.3 radio’s Facebook page in Orlando, where it captured the attention of thousands of individuals who both “liked” and shared the post.

“We prayed over our meal and the waitress came over at the end of the meal and said, ‘Just so you know, we gave you a 15% discount for praying,’ which I’d never seen before,” Smith told HLN, adding that she’s surprised by how quickly the photo spread online. “I just innocently posted it to my Facebook page and it’s been really fun to see where it’s gone from there,” she said.

Smith was also “definitely surprised” by the 15% savings. She added that “the three of us at the table talked about how wonderful that is and what a cool thing it is that they do as business owners.” Of course, not everyone will agree. Before anyone takes issue with and jumps all over Haglund’s business for rewarding Christian behavior, the 60-year-old diner owner said the discount was never limited to a specific type of prayer, religious perspective, or particular higher power. Besides, nothing in our country says there has to be a separation of church and plate.

Principal Suspends Over 500 STUDENTS to Prove THIS Point 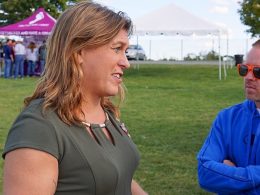 Madison Cawthorn is known to make headlines in recent months. Most notably as the youngest member of congress.…
byStaff Editor

Teacher Couldn’t Handle Violent Student, Then Someone in the Classroom Stood Up…

Although not all of us may be able to sympathize with them, we can agree that from the…
byStaff Editor