On Sunday, a 75-year-old watermelon farmer discovered something truly shocking. Five young girls lying on the ground. “One of them was naked and crawling.” Welcome to America. Jimmy Hobbs and his wife blame Joe Biden and his progressive open borders policies. “If this doesn’t make you mad and make you want to take to the streets, I don’t know what will. They have no mother, no father, no nothing.”

Last night I shared a heartbreaking photo of young children found by a farmer on his land in Quemado. While we thank God they were found alive, these tragic scenes are happening more & more.

Today I visited with him & talked about the border crisis. We need a solution now. pic.twitter.com/Zzvk4UgAGc

On Sunday, five young girls were discovered “lying on the ground” on a Texas ranch. “One of them was naked and crawling.”

The farmer found the children from Honduras and Guatemala “hungry and crying after being left by their families” to try to get into America alone. The oldest was age 7, and the group included a two-year-old besides the crawling infant.

75-year-old Jimmy Hobbs, the farmer who discovered the children spoke with Texas Congressman Tony Gonzales, along with his wife Katie Hobbs. Gonzales shared images with America on Twitter which quickly went viral.

In one video, Katie can be heard lamenting, about these “children dumped out on the side of the river here on our farm.” She went on to note, “if this doesn’t make you mad and make you want to take to the streets, I don’t know what will. They have no mother, no father, no nothing. This is one of our workers’ wives right here taking care of this tiny one. No one with these children.”

Hobbs is an onion and watermelon farmer in what used to be America. He doesn’t know “nothin’ about birthin’ no babies.” The last thing he expected to find coming up out of the dirt on his farm was a group of children. since his farm sits in Quemado, Texas which is right on the border with the Mexican state of Coahuila, he’s used to trespassers. In this case though, he’s furious.

“The girls would have died if he hadn’t found them.” With His Wisdom Joe Biden in office, “the situation at the border is the worst it has been in the 75 years he has lived on the farm.”

Hobbs and his wife agree that there will be “thousands more” who “get into perilous danger and die this summer” trying to illegally cross the border into America “as temperatures rise and President Biden continues to shrug off the crisis.”

Since Imperial Leader Biden usurped office and threw the borders wide open, nearly 20,000 children were abandoned by their parents on our doorstep.

They toddle their way across the Rio Grande and have been entering America along the southern border at “an all-time monthly high that has forced the Biden administration to house migrant teenagers in convention centers, camps for oil workers, and a military base.”

Earlier this month, an off duty border agent in a remote stretch of Texas spotted “a little boy walking by the side of the road by himself.” He pulled over and the boy instantly started begging for help. He was “left by a group of people to fend for himself.” He had no idea where in America he even was.

Mr. Hobbs begs Imperial Leader Biden to “tighten the rules to prevent people from flooding the border or come and see the crisis for yourself. We’re talking about how the United States is a humane country, this is not humane anymore, and it all started under Biden.”

Jen Psaki has been around that track and so its not just going to happen like that, because…
byMatthew Holloway
One comment

Attorney General Ken Paxton of Texas is making headlines in the wake of the inauguration of Joe Biden.…
byMatthew Holloway
2 comments 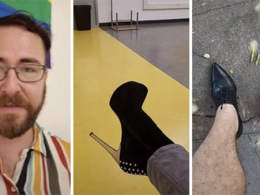 The latest domino to fall in the ever-expanding scandal that has drowned CNN is the largest. The fatally…
byMatthew Holloway

How to Fight the Indoctrination of Our Children

The Left isn’t hiding their propaganda any longer, and their main target is our children. Their indoctrination agenda…
byKasey Dean