Thanks to a federal judge in Washington, D.C., Donald Trump has pulled off a major win against the radical left. On June 22, Judge Dabney L. Friedrich dismissed several claims made by Black Lives Matter and the American Civil Liberties Union (ACLU) against the former president, former Attorney General William Barr, and other officials.

According to reporting by The Washington Post, the plaintiffs, including BLM and the ACLU, claimed that “the government used unnecessary force to enable a photo op of President Donald Trump holding a Bible outside of the historical St. John’s Church.”

Judge Friedrich dismissed these claims, concluding that “allegations that federal officials conspired to make way for the photo [were] too speculative,” The Washington Post reported.

The judge also concluded that AG Barr and then-Park Police Chief Gregory T. Monahan acted within the scope of their duties, and therefore have immunity from civil suits. She later noted that the Black Lives Matter organization had no standing to initiate a lawsuit, as it could not prove that it had been directly harmed by then-President Trump’s actions that day or the Park Police’s decision to move protesters further away from the White House.

According to the judge, the claims relied on “conclusory allegations” that “Trump, Barr and then-Defense Secretary Mark T. Esper directed a conspiracy to violate the civil rights of demonstrators just before the park was cleared.”

Further, Judge Friedrich also refused to grant the “protesters” an injunction against further action from the federal government, dashing their hopes that they could be allowed to avoid arrest for their actions that day.

“The plaintiffs’ claims of impending future harm are too speculative to confer standing to seek an injunction,” the judge wrote.

In the lawsuit, Black Lives Matter and the ACLU tried to claim that Park Police “officers attacked and improperly dispersed the protesters—they did not restrain them or attempt to seize them in place.”

The judge refuted that claim, arguing that “quite the opposite was true—the officers attempted to cause the protestors and fleeing crowd to leave their location, rather than cause them to remain there.”

This decision comes soon after the Office of the Inspector General for the U.S. Department of the Interior revealed that the decision to expand the perimeter in Lafayette Square and push protesters out of the area was made long before President Trump decided to travel to the church, which the protesters had attempted to burn down. According to the report, Park Police were actually surprised to see the president in the area that day.

“The evidence we obtained did not support a finding that the [United States Park Police] cleared the park to allow the president to survey the damage and walk to St. John’s Church. Instead, the evidence we reviewed showed that the USPP cleared the park to allow the contractor to safely install the antiscale fencing in response to the destruction of property and injury to officers occurring on May 30 and 31,” the Inspector General’s report read. 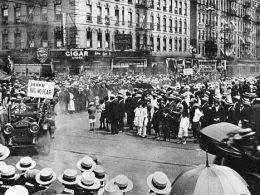