U.S. District Court Judge Lynn Hughes has devastated 117 nurses of the Houston Methodist hospital system by not merely ruling against their wrongful termination suit, clinging blindly to the narrow legal standard the law holds in Texas for such cases. But went on to snidely strike down the arguments of the plaintiffs with little real explanation or reasoning. The decision of course comes as a victory for the Hospital chain, enabling them to coerce their employees into compliance with a COVID19 vaccination mandate by threatening their livelihood in a crippled economy that isn’t conducive to ready re-employment and/or relocation.

The nurses in the suit led by Jennifer Bridges charged that the hospital is “forcing its employees to be human ‘guinea pigs’ as a condition for continued employment.” according to The Hill. Judge Hughes refuted this notion out of hand, simply ignoring any argument to the contrary rather than engaging them honestly. In the single most glaring departure from reality, the Judge with absolutely no supporting comments, citation or explanation simply states that the COVID19 vaccines, which are only in use due to a EUA or Emergency Use Authorization and are not in any way licensed by the FDA are not “experimental”, an assertion which on its’ face is patently false.

Judge Hughes wrote in his ruling,

“Bridges dedicates the bulk of her pleadings to arguing that the currently available COVID-19 vaccines are experimental and dangerous. This claim is false, and it is also irrelevant.”

She goes on to state that in Texas, wrongful termination only applies when a person is made to take any action that is illegal. “Bridges argues that, if she is fired for refusing to be injected with a vaccine, she will be wrongfully terminated.” The Judge then artfully stripped out the central premise of the case writing: ” Vaccine safety and efficacy are not considered in adjudicating this issue.”

The Fight Doesn’t End Just Because a Judge Dismisses It

According to Deseret News, this fight isn’t over yet, not even by a little bit.

“Attorney Jared Woodfill, who filed the lawsuit on behalf of the small group of Houston Methodist employees, said ahead of the federal district court’s decision that “this is the first battle in a long fight,” according to KHOU-11.

“We’re OK with this decision. We are appealing. This will be taken all the way to the Supreme Court. This is far from over. This is literally only the beginning,” Bridges told KHOU-11.

Imagine that: the core argument of a case is not considered in adjudicating the case. It’s almost as if we’ve seen that in every major case concerning President Trump and the 2020 Election! Easily the obtuse rulings in defiance of common rationale and reasoning that are becoming common in 2020’s jurisprudence are beginning to take on a very sinister tone, that of a dystopian ideological state, one that flies in the face of common sense and feels comfortable issuing rulings that defy logic. Because no one can really challenge them.

“This is just one battle in a larger war to protect the rights of employees to be free from being forced to participate in a vaccine trial as a condition for employment,” Woodfill said. “Ultimately, I believe Methodist Hospital will be held accountable for their conduct.” Eventually, if our nation stays on this course: so will the courts.

In the fallout and subsequent investigation of the US Capitol breach on January 6th, the Biden-Harris regime’s DOJ…
byadmin
2 comments

The split between conservative rural areas and progressive-socialist cities is on course to become not merely cultural, but…
byadmin
2 comments

Shocking news coming from Havana, Cuba this Friday as a massive explosion has destroyed the Hotel Saratoga, killing…
byStaff Editor 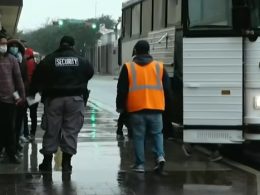