Spain has made the decision to willingly take in tens of thousands of refugees from Middle Eastern countries like Libya and Syria in reaction to the Arab Spring, and they are only one of the many countries that have chosen to open their borders up to refugees.

Sadly enough, however, rather than show appreciation and gratefulness to the country of Spain for saving them from their war-torn countries as well as providing a safe environment, these Muslim migrants have instead been causing chaos.

That being said, what has taken place during this Holy Week is only one of the multiple recorded incidences of violence in connection with Muslim migrants.

Multiple reports have shared that a group of Muslim migrants from a nearby shelter attacked Christians by tossing rocks and other projectiles at them during an Easter procession in Granada, Spain.

Unfortunately, there have been other previous instances of violence, as a group of migrants attempted to attack the Easter procession in El Vendrell (Tarragona) during Palm Sunday.

Fortunately, police were already on site and able to break up the attack in a timely fashion.

“A group of unaccompanied minor refugees from the Bermúdez de Castro hostel in Granada disrupted the Catholic procession in the early hours of Holy Thursday morning (…) Fortunately, the quick intervention of the police prevented serious incidents.

Total outrage in Granada. The procession had been on the road for about an hour and a half, and as it went down the Cuesta del Chapiz, a large number of objects began to rain down on those present. All of these projectiles came from the migrant shelter mentioned above, as several sources confirmed.

The president of Vox Granada, Onofre Miralles, condemned the events through his networks: “Yesterday I had the honour of accompanying the procession. I was informed that objects were thrown at the procession from the reception centre for underage migrants. They are directed against our culture and our tradition. I demand action on the part of the Region of Andalusia”.

This is the umpteenth attack on a Catholic procession during Holy Week. It is not the first incident and unfortunately, it will not be the last. Last Sunday, a group of North Africans had tried to attack the Easter procession in El Vendrell (Tarragona).”

As a result of Spain’s borders opening up to Middle Eastern refugees, citizens are now constantly under threat. However, despite the multiple instances of violence and continued instability these migrants pose to the Spaniard and Christian population, Spain’s left-wing government still refuses to close their borders, vet illegals, or deport potential terrorists.

Given the continued pushback by the government, it sadly comes as no surprise that these Muslim migrants attacked Christians during their Holy Week.

Recently unearthed footage shows that Dr. Anthony Fauci was fear mongering long before the COVID pandemic. In an…
byadmin
2 comments

MyPillow, Inc. is striking back against Dominion Voting Systems and continuing the struggle for the United States. The…
byadmin
No comments 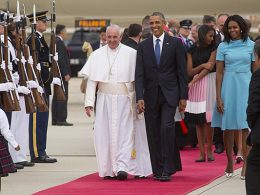