In yet another instance of spineless “Republicans” lashing out at President Trump and betraying their base, Wyoming Representative Liz Cheney has blamed the president for the protesters that stormed the Capitol building on January 6.

According to Cheney, President Trump “lit the flame” that ignited the mob. The Democrats and the mainstream media seem to agree with her, while every sane conservative can see that the president never called for violence or any sort of mob behavior.

Democrats, RINOs, and the mainstream media seem to have forgotten the violence this country has endured over the last year due to ANTIFA and Black Lives Matter rioters. While they have been attacking federal buildings, businesses, and innocent people all year, Trump supporters have never started a serious conflict until now, when they have become so angry and frustrated with the lack of support they have been shown by their own elected leaders.

Cheney, who is the House Republican Conference Chair, condemned President Trump on Fox News. “We just had a violent mob assault the U.S. Capitol in an attempt to prevent us from carrying out our constitutional duty,” she said.

“The mob will not prevail,” she continued.

“What he has done and what he has caused here is something that we’ve never seen before in our history. It’s been 245 years, and no president has ever failed to concede or agree to leave office after the Electoral College has voted, and I think what we are seeing today is the result of that, the result of convincing people that somehow Congress was going to overturn the results of this election, the results of suggesting that he wouldn’t leave office,” she told the former conservative news network.

President Trump had something to say about RINOs like Cheney earlier today.

“We’ve got to get rid of the weak Congress people, the ones that aren’t any good,” Trump told the crowd.

“The Liz Cheneys of the world,” he added. 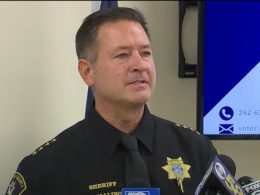 Socialist Sen. Bernie Sanders (I., Vt.) is planning a blitz of campaign activities to “rally youthful citizens as…
byadmin