South Dakota Governor Kristi Noem did it her way. She didn’t like the way the legislature worded a proposed measure and now she’s taking heat from uninformed members of the conservative right. There’s really no reason to be upset with her. The executive orders she signed get the same job done, without risk of being overturned by the liberal courts. The important thing is that only girls will be playing in girls sports there.

When South Dakota Governor Kristi Noem refused to sign a bill meant to “bar biological males from competing as transgender females in women’s sports,” the registered Republican took a lot of heat from the right. They came unglued thinking she opposed the measure.

She agreed in principle but was afraid the wording opened the state up to adverse consequences. She solved the problem by issuing a pair of executive orders but still hasn’t convinced those who don’t understand her subtlety.

On Monday, Noem called her rejection of the bill a “style and form” veto and the state legislature went spastic. They tried to overturn her veto but the House couldn’t produce the votes to make it law without her autograph so it was dead in the water.

That doesn’t mean that there will be boys on the girls wrestling teams. She gave the lawmakers a chance to change the lingo but they blew it. Rather than leave the girls unprotected, she scribbled off two executive prescriptions to make it all better.

“Only girls should play girls’ sports, Noem tweeted. “Given the legislature’s failure to accept my proposed revisions to HB 1217, I am immediately signing two executive orders to address this issue.” The first is designed to “protect fairness in K-12 athletics” and the other for college level.

The proposed law had been called the “Fairness in Women’s Sports act.” She also gave her state lawmakers a heads up that she wants to get together with them on other pressing issues. She wants to hold a special session to tackle “medicinal marijuana and the latest federal spending package.”

Only females shall participate

According to the first of her executive orders, Noem declared that “only females, based on their biological sex” will be allowed to “participate in any girls’ or women’s athletic event sanctioned by a public school.”

Anything sponsored by a school district would be covered as well. She instructs the South Dakota Department of Education to “establish a policy consistent” with her order.

At the college level, the policy is similar but differs in the directive. The Board of Regents “should take any and all steps necessary within the law of the state to legally implement policies consistent” with her order. Governor Noem admits that she refused to sign the bill but insists she didn’t “veto” it.

The legislators are miffed at her semantics and say she’s wrong. “Her letter back to the House said ‘I have not vetoed the bill’ but her actions said otherwise,” GOP House Speaker Spencer Gosch complains.

The controversial way Noem sidestepped the legislature “has undermined her reputation as a stalwart conservative governor earned during the coronavirus pandemic.” They’ll get over it she suggests. “The bill would have invited legal challenges that South Dakota would have lost,” she advises. “The NCAA and other interest groups would have taken revenge” by pulling engagement and opportunities. Her spokesman Ian Fury insists “the governor was a victim of ‘cancel culture’ from conservatives.”

She’s “used to fighting off criticism from the left. After all, in the past year, she was the only governor in the entire nation to never order a single business or church in her state to close. The left bullied her incessantly, but she didn’t cave. But if any number of conservative pundits are to be believed, that same governor who refused to cave is now caving to the NCAA and Amazon on the issue of fairness in women’s sports.” 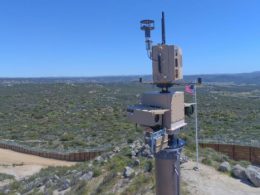