In a 5-4 ruling, SCOTUS has given the Republican Party a major win in the redistricting fight by blocking Democrats in a key state from redrawing a more favorable House map that would have potentially added another seat.

Media Right News reports: “The ruling may have been impacted by the fact that Democrats just maneuvered an enormous gerrymander in New York, which will likely slash Republican seats in half.”

Of course, the Supreme Court ruling was decided on a razor thin 5-4 margin, as fake-conservative Justice John Roberts once again sided with the leftist wing of the court.

The ruling from SCOTUS orders a stay on the new Democrat-drawn map, allowing Alabama to keep the previous GOP-drawn map while the court considers the case fully.

“The stay will allow this Court to decide the merits in an orderly fashion — after full briefing, oral argument, and our usual extensive internal deliberations — and ensure that we do not have to decide the merits on the emergency docket,” Kavanaugh wrote in an opinion joined by Justice Samuel Alito.

Kavanaugh joined by Alito write separately to say that he is granting a stay because of the election schedule. pic.twitter.com/J9oTtO5Ef1

Democrats are complaining that the current map doesn’t give black voters adequate representation in Alabama, claiming that it is unfair that they only have one majority-black seat while making up approximately 27% of the constituency.

Speaking about the previous court ruling that sided with the Democrats, Alabama Attorney General Steve Marshall argued that it would have required the state to put race above other redistricting criteria.

Redistricting expert Dave Wasserman tweeted about the decision, writing: “The SCOTUS stay is obviously a huge win for Republicans and a blow to a coalition of Dems/civil rights groups seeking an additional Black opportunity seat in AL (and LA/SC). The 6R-1D GOP map will stand for 2022, and possibly longer.”

The SCOTUS stay is obviously a huge win for Republicans and a blow to a coalition of Dems/civil rights groups seeking an additional Black opportunity seat in AL (and LA/SC). The 6R-1D GOP map will stand for 2022, and possibly longer. 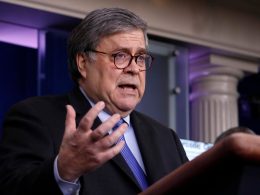 Leftist Media Outlet Begins to Dig Its Grave After This…

Just like Obama President Biden has made a nuclear deal with Iran. The deal will lift sanctions on…
byadmin

Biden’s Most Terrifying Words Yet Revealed

President Joe Biden may have uttered the six scariest words of his so far, bowel-voiding-ly terrifying term in…
byStaff Editor