The California court of appeals judge has decided to rule in favor of drug dealers, allowing them the ability to continue their malicious work in the state, despite previous attempts from the city to restrict four suspected drug dealers from entering the Tenderloin district.

This case has origins dated back to 2020 when San Francisco was making active attempts to clean up the Tenderloin and South of Market neighborhoods by suing a sizable group of alleged drug dealers who were known to frequent these areas, already rampant with drug use and the largest number of overdose deaths.

If approved in the California Superior Court, then San Francisco City Attorney Dennis Herrera stated that the lawsuits would’ve helped to prevent the 28 alleged dealers from re-entering these districts.

The Daily Wire reported that, the city had named Christian Noel Padilla-Martel, Victor Zelaya, 27, Jarold Sanchez, 23, and Guadaloupe Aguilar-Benegas, 28, as individuals who should be banned from the district, saying they had been “engaged in the illegal sale of controlled substances.” But Justice Marla Miller said the city was infringing on the constitutional right to travel.

“The court determined that excluding defendants from such a large area in the center of San Francisco implicates the constitutional right to intrastate travel … and the City failed to meet its evidentiary burden of convincing the court that its proposed remedy was sufficiently tailored to minimally infringe upon the protected interests at stake.”

The outlet added,  Padilla Martel, who had been arrested three times on drug charges, claimed he needed access to the district to see his young son living with his grandparents; Zelaya, also arrested three times, said he wanted to visit his two daughters from a prior relationship; Aguilar-Benegas. who has been arrested five times and is pregnant, said her ultrasound needed to be taken in the district.

“We are currently evaluating potential next steps, and we will continue to look for ways to use civil law to promote and increase public safety in the Tenderloin.”

“San Francisco Police reported about 600 drug-dealing arrests in 2020, with 40 percent of the 699 fatal overdoses reported that year taking place in Tenderloin and the city’s South Market neighborhood. In Tenderloin specifically, police seized over $280,000 in cash from a drug bust and collected more than 18 kilograms of heroin, cocaine, methamphetamine, and fentanyl in 2020.”

According to an NPR report back in November 2021:

“Faced with a stunning rise in drug overdose deaths the last few years, the vast majority tied to fentanyl, San Francisco has launched mobile teams made up of paramedics and nurses.” 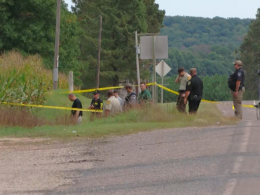 Four dead bodies were found mysteriously dumped in an abandoned SUV in a cornfield in Wisconsin. The victims…
byadmin

An AR-15 has now been put in a safe at every school in Madison County, North Carolina, thanks…
byStaff Editor

The supposed “American Rescue Plan” has passed the Senate with some minor changes to the $1.9 trillion leftist…
byadmin
No comments