Let’s talk about sex, baby. At least that is all that will be on the minds of those who enter Kinky’s Dessert Bar on the lower east side of Manhattan. This supposedly sex-positive space was the brainchild of August and John DeWindt.

The homosexual couple behind other New York City hangouts, such as Fluffy’s and Johns Juice, wanted to take on the trend of genitalia-shaped desserts that are a staple at night markets in Taiwan. This trend has also gained popularity in Spain, France, and the UK.

At Kinky's Dessert Bar, they like it sweet AND sexy: https://t.co/ZZ5K5qDRsD#NewYork

Sex On The Mind

Kinky’s Dessert Bar, at 181 Orchard Street, opened on Valentine’s day at 5 pm. The DeWindt’s were banking on New Yorkers’ desire for a bit of romance after the pandemic.

But don’t worry Kinky’s practices safe sex. They made sure to follow the guidelines of the city’s vaccination mandate. Those who come to the dessert bar, however, must not only show their vaccination status but also their ID. You can. only enter the confectionary shop if you are 18 or older due to the sexually explicit pornographic material decorating the walls.

New York City fired 1,430 city workers — less than 1% of its workforce — on Friday for failing to comply with its vaccine mandate. https://t.co/a4KbtTiRLY

The location is two-storied with the bar and pastry shop on the first floor and an open sitting area on the second. Kinky’s is in the works of getting its liquor license but until it is approved will be selling sex-themed “mock-tails.”

5 members of a family-run sex #Trafficking operation smuggled young Mexican women and girls—some as young as 14 years old—to #NewYorkCity and forced them into prostitution.

The Desserts sold range from penis-shaped waffles, with a white cream glaze, cupcakes with vaginas or breasts decorated into the icing, or creamed-filled donuts with a decoration depicting oral sex.

The Truth About Kinky’s

Another industry that must and will be exposed…

No one should be mocking feminists and other activists who are fighting against the largest and most corrupt industries. Be with them.

Sex is a healthy and beautiful part of a marriage. It connects two people in a way that nothing else can but our society continues to cheapen it. Creating an illusion that sex is easy to do and easy to move on from afterward.

But in reality, sex has lasting effects on us. Especially sexually explicit material that we are now inundated with on a regular basis from television shows, commercials, and now kinky dessert shops.

By all means, if a place like Kinky’s tickles your fancy you are more than free to enjoy its sugary treats but be aware that such language of “sex positivity” is leading society down a dangerous road. A road where pedophilia is demanding to be accepted, where victims of sex crimes have no voice, and where your sex life will end up feeling empty and unfulfilling.

Transgender inmate, Cristina Iglesias has spent their entire adult life inside federal prison. Back in 1994, Iglesias was…
byadmin 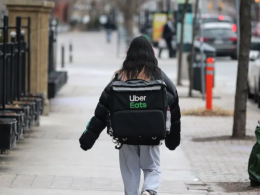 Drug Paraphernalia…Now Delivered to Your Home

Canadian Residents will now be able to get cannabis delivered to their homes through UberEats in Toronto. UberEats has…
byadmin

Trump No Longer Receiving Support From…

The support for Donald Trump continues to disappear. Now his former Secretary of State, Mike Pompeo, is taking…
byStaff Editor